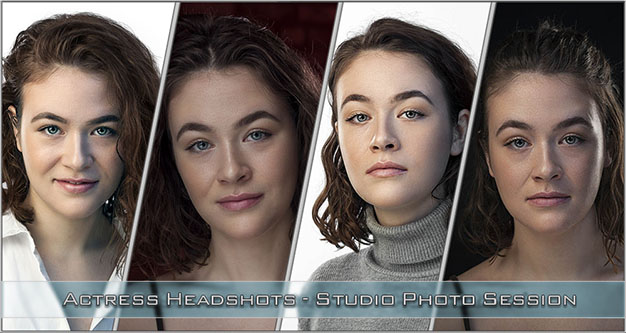 Although photographing mainly corporate and business headshots, I always was interested in working with actors and models, the sort of people possessing more artistic and creative potential in front of the camera. And what better place to meet and photograph interesting people, of any trade, than in the great city of London. This was the case with my latest work I did in the studio.

Recently I was contacted by a young and aspiring actress who was in need of some fresh/new and creative headshots – for her portfolio. This was a great opportunity for me, as finally I had the chance to work with an actor.

She was impressed with my creative portraits work and wanted something similar, a headshot session more suitable for her acting career.

After we agreed on a date, two hours studio time was scheduled and the plan was to explore two to three outfits, looks and lighting setups – yes, I always like to challenge myself.

Photographing Headshots in a Studio.

It seems most people prefer their headshots to be photographed in a studio rather on location. My client also wanted to come down to the studio as she wasn’t really aware of any good location where she could feel comfortable enough.

For most situations studio can be the better option as it provides a full control over the lighting – the most important aspect of photography. Studio, if equipped well, can also provide more flexibility to the dynamics of a photo-shoot. Another aspect studio can provide is security and consistency, where a photo-session won’t be impacted by a bad weather or perhaps ambient distractions such as people passing by or just to find out that you are not allowed to photograph on the particular location.

The studio I use is fairly simple, white and black backdrops are available only in addition to a brick wall – which I decided to use for this photo-shoot. At first it may seems like limitation in term of background options, but being in a studio with all the lighting available a white background can easily be turned into any color we like – as I described the process in one of my previous blog posts (Lighting evenly illuminated background for corporate headshots).

For most parts headshots can be quite boring, mainly do to the fact that they are created upon industry standards requirements rather than on creative inspiration.

However, this session was approached in a more relaxed manner – my client welcomed any ideas and inclined to try new approaches.

Once the mood was established and the “air cleared” (we knew we were on the same path), I decided to proceed and give, otherwise simple, studio setup more glamours appearance.

Below are the three looks, I managed to recreate within the short time spend in the studio:

As I mentioned earlier we had the idea of covering few looks and moods, for this I decided to take advantage of the brick wall in the studio. Usually I would of added a blueish tint for the background, when recreating darker ambient mood,  but in this case I decided to go with one light (aimed at the wall, behind the model) colored in red. In case you wonder why red, it is because – in this case was a much better idea to supplement the red of the bricks than going against it. Otherwise I could of ended with some unpleasant mixture of colors.

And the result can be seeing on the image bellow:

After deciding that we had some nice headshots from the first set, the easiest thing to do was switching to look number two – by just rolling down the black paper background and continuing with the dark/low-key look. A minor adjustment in the lighting setup also needed to be done, but it didn’t impact the timing of the session. While I was preparing the studio for this setup, my actress model changed quickly her hair style and decided to proceed with the same outfit.

And once we were all ready, we continued with the photo-shoot. With this look I was hoping to pull out a different mood and appearance, from my actress model – trying to explore fully the opportunity of working with an actor.

Personally, I really enjoy photographing high-key portraits/headshots. I find it more challenging and also providing me with the opportunity to use more lights – something I really like to play with.

The last look I went on to photograph was a high-key, naturally photographed on a white background. For this set my model/actress changed her hair and outfit, it was a very good decision as it connected very well with the brighter rendition of the high-key headshot. One little trick I applied here was to color gel my fill light blue, by doing this my camera WB shifted and thus warmed my main light – resulting in more contrasted end result.

On both images bellow the actress is wearing two different outfits, very good example illustrating how versatile high-key portraiture look can be.

I found working with actors to be a very good experience, as the people on both side of the camera are creatively involved into the process of creating stunning headhots results. On another note, after remembering now, this is not the first time I have photographed actors, while ago I was approached by young film makers in need of still images for their DVD/Film cover – Blood Money movie cover photoshoot.

Thank you very much for stopping by and reading this update on my blog post, and if you landed here while searching for actor headshots photographer – you are very welcome to contact me if you’d like to find out more about potential photo-shoot in my photo studio or perhaps on a location.