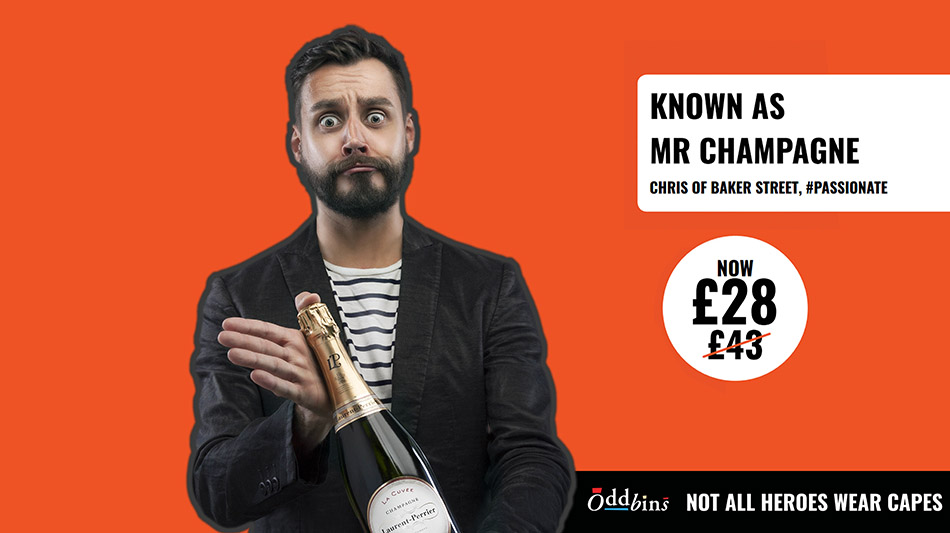 Recently I had the pleasure of working with some good clients such as – Amazon, Kodak and Oddbins. In this blog post I’d like to share my experience and latest photo session I have done for OddBins.

As usual, I was contacted by a person looking for a professional photographer – who can do some creative portrait photography work for their latest advertising campaign. Of course ranking on first page of Google for the particular keywords worked in my favour, as this is how the team from OddBins came across my photography portfolio.

After quoting my services, and probably competing with at least several other photographers, it turned out that I was the successful candidate, even though (as I found later) my quote wasn’t the lowest (as probably many, young, photographers thing – is not always the keys that a client will award you a job only because you are the cheapest)

Below you can see some of the images, with the final design.

In preparation for the photoshoot I hired a photographic studio in Brixton, London. The idea of this campaign, and the photoshoot, was to capture portraits of the “everyday heroes” – the people at the front line, offering you the best wine when visiting the stores. Because we needed to photograph people from the staff working in the stores, the photoshoot was scheduled over two days – do to the availability of the participants.

Good thing was that the studio, I hired, was equipped quite well, as I end up building my setup with 6 Bowens strobes (this was the brand the studio was using). Now if you are asking why I used so many strobes, I would explain.

My main reason for using so many strobes was – because I had the idea of creating a zone with global lighting – lighting that would cover larger area. I knew, from the brief, we weren’t going to take just portraits (as in the conventional way of capturing portraits) but rather improvising by holding, new arrivals, bottles of wine and other beverages. Also I was not going to work with professional models, so I knew they won’t be use to keeping in mind where the main light is etc.

For this lighting setup I needed to make sure I was keeping the lighting ratio very close, no big differences in the power output of the strobes.

Another reason for creating such global/soft lighting, was the fact that there wasn’t a fix position of how, the models, were going to hold the bottles – as I mentioned, we had lots of improvising going on over the two days (which of course resulted in lots of fun).

Two of the strobes I used for the background. Something, I probably should’ve start with, was the fact  my client wanted the images shot on a grey background – so their team of designers could do the final design, the way they wanted.

Being honest, I need to say it was a lot of work – high volume shooting over two full days. I needed to cover 7 models/heroes, with many variations of the whole range of products we had on the setup.

Nevertheless it was superb and fun experience and I’m, also, so glad that I had the chance to work for such client. Nevertheless, it is so cool seeing your work on the homepage of popular website such as OddBins one.

Corporate photography and portrait session with one flash
04/10/2017